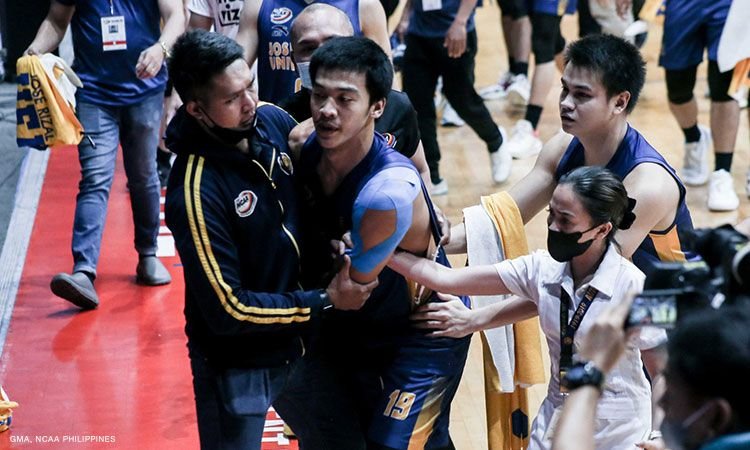 Metro Manila  — The camp of College of St. Benilde is considering filing complaints against Jose Rizal University’s John Amore for charging into their bench and going on a punching spree Tuesday at the FilOil EcoOil Centre in San Juan City.

With 3:22 remaining in the final quarter and CSB on its way to a lopsided victory, Amores stormed into Benilde’s bench, thowing haymakers that hit a couple of CSB players.

Benilde head coach Charles Tiu bared that one of his players was told by his parents that filing a complaint is definitely on the table after the incident, given that Amores has had a history of violence on the court.

“One of my players told me that that his parents are telling him that they should file charges. Maybe it would be more tolerable if it was an isolated incident but this has happened in the past. I think something needs to be done. I believe they will but I leave it up to the higher ups,” he told CNN Philippines’ Sports Desk Wednesday.

This is not the first time that Amores was involved in a punching incident. He previously punched University of the Philippines’ Mark Gil Belmonte which resulted in an indefinite suspension in the PG Flex Linolium-UCBL Preseason Tournament.

“You see this guy (Amores) fighting every game. Every game he’s fighting. We never had history of guys fighting,” Tiu said.

It stated that UP requested JRU to conduct an internal investigation and impose appropriate disciplinary action following Amores’ punching incident with Belmonte.

Tiu also gave an update on the status of his players that were punched by Amores. He said that no surgery is required for both cagers.

“They got discharged from the hospital at about 3-4 a.m. Thankfully for (Jimboy) Pasturan, I think it’s just a black eye. (Taine) Davis, we had him have a CT scan because he had a concussion with the punch in his jaw. Everything was hurting. I think for the most there’s not gonna be any surgery,” he said.

Asked if there was someone from the CSB who provoked Amores, Tiu said that his players were reminded to not engage in extracurricular activities as they should focus in their Final Four chase.

“My players don’t trashtalk because they are not allowed to. We make sure that we stop them from doing any of these things. I yell at them if I ever see them trash talking any player. We know we have a bigger picture. We’re here to play basketball. We’re not trying to start fights. We held our ground, we held back, and unfortunately my players were punched,” he said.

Benilde is currently at second place in the team standings with a 10-3 win-loss record.