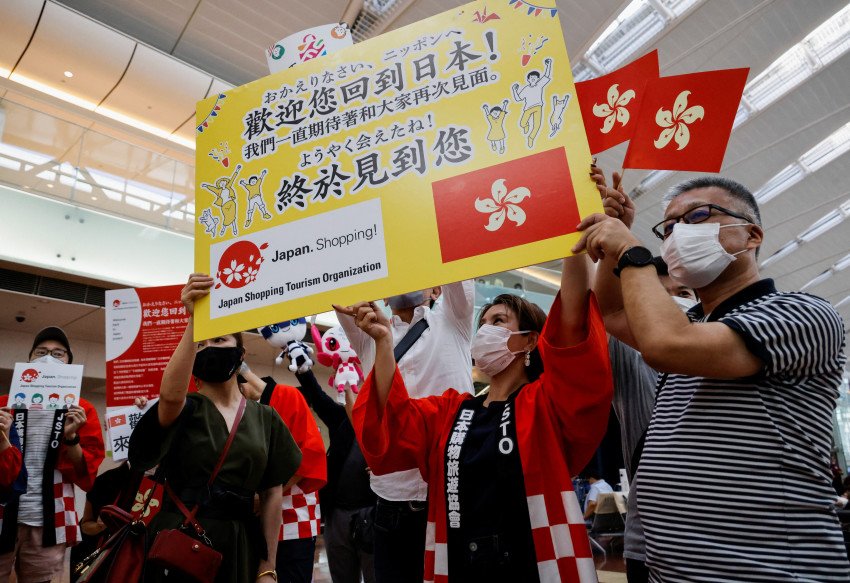 TOKYO – As Japan throws open its doors to visitors after more than two years of pandemic isolation, hopes for a tourism boom face tough headwinds amid shuttered shops and a shortage of hospitality workers.

From Tuesday, Japan will reinstate visa-free travel to dozens of countries, ending some of world’s strictest border controls to slow the spread of COVID-19. Prime Minister Fumio Kishida is counting on tourism to help invigorate the economy and reap some benefits from the yen’s slide to a 24-year low. Independent tourism will also be allowed.

However, entrants must still provide proof of having had three vaccinations.

Arata Sawa is among those eager for the return of foreign tourists, who previously comprised up to 90% of the guests at his traditional inn.

“I’m hoping and anticipating that a lot of foreigners will come to Japan, just like before COVID,” said Sawa, the third-generation owner of the Sawanoya ryokan in Tokyo.

Just over half a million visitors have come to Japan so far in 2022, compared with a record 31.8 million in 2019. The government had a goal of 40 million in 2020 timed with the Tokyo Summer Olympics until both were upended by the coronavirus.

Kishida said last week the government is aiming to attract 5 trillion yen in annual tourist spending. But that goal may be too ambitious for a sector that has atrophied during the pandemic. Hotel employment slumped 22% between 2019 and 2021, according to government data.

Spending from overseas visitors will reach only 2.1 trillion yen by 2023 and won’t exceed pre-COVID levels until 2025, wrote Nomura Research Institute economist Takahide Kiuchi in a report.

Narita Airport, Japan’s biggest international airport some 70 kilometers from Tokyo, remains eerily quiet, with about half of its 260 shops and restaurants shuttered.

“It’s like half a ghost town,” said 70-year old Maria Satherley from New Zealand, gesturing at the Terminal 1 departure area.

Satherley, whose son lives in the northern island of Hokkaido, said she would like to return with her granddaughter this winter but probably won’t because the child is too young to be vaccinated, a prerequisite for tourists entering Japan.

“We’re just going to wait until next year,” she said.

Amina Collection Co has shut its three souvenir shops at Narita and is unlikely to reopen them until next spring, said president Sawato Shindo.

The company reallocated staff and supplies from the airport to other locations in its 120-shop chain around Japan as it refocused on domestic tourism during the pandemic.

“I don’t think there’s going to be a sudden return to the pre-pandemic situation,” Shindo said. “Restrictions are still pretty strict compared to other countries.”

Japan still strongly encourages that people wear masks indoors and refrain from loud talking. The cabinet last Friday approved changing hotel regulations so that they can refuse guests who do not obey infection controls during an outbreak.

Many service workers found better working conditions and wages in other fields over the past two years, so luring them back may be difficult, said a consultant for tourism companies who asked not to be identified.

“The hospitality industry is very infamous for low wages, so if the government values tourism as a key industry, financial support or subsidies are probably needed,” he added.

The Japanese government is starting a domestic travel initiative this month that offers transportation and accommodation discounts, similar to its Go To Travel campaign in 2020 that was cut short following a surge in COVID infections.

Almost 73% of hotels nationwide said they were short of regular workers in August, up from about 27% a year earlier, according to market research firm Teikoku Databank.

In Kawaguchiko, a lake town at the foot of Mount Fuji, inns had difficulty staffing before the pandemic amid Japan’s tight labour market and they anticipate a similar bottleneck now, said a trade group staffer who asked not to be identified.

That sentiment was echoed by Akihisa Inaba, general manager at the hot-spring resort Yokikan in Shizuoka, central Japan, who said short staffing during the summer meant workers had to forego time off.

“Naturally, the labor shortage will become more pronounced when inbound travel returns,” said Inaba. “So, I’m not so sure we can be overjoyed.”

Whether overseas visitors wear face masks and abide by other common infection controls in Japan is another concern. The strict border controls were broadly popular during most of the pandemic, and fears remain about the appearance of new viral variants.

“From the start of the pandemic until now, we’ve had just a few foreign guests,” said Tokyo innkeeper Sawa. “Pretty much all of them wore masks, but I’m really not sure whether the people who visit from here on will do the same.

“My plan is to kindly ask them to wear a mask while inside the building,” he added.