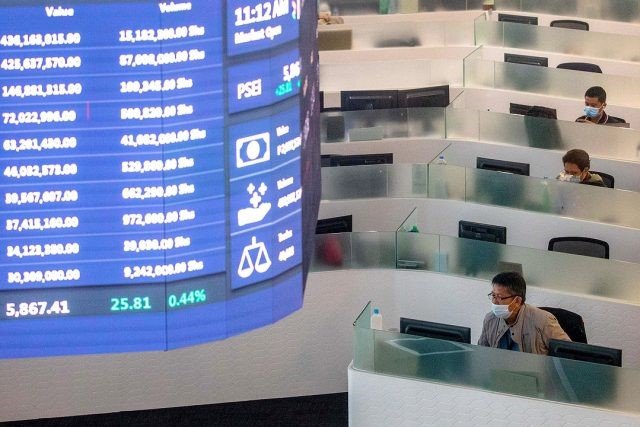 SHARES may continue to drop this week as the war between Russia and Ukraine rages on and ahead of the US Federal Reserve’s monetary policy review.

Stocks dropped on Friday after failed peace talks between Russia and Ukraine and as US inflation hit a 40-year high.

“The local market fell this Friday, taking cues from Wall Street’s decline overnight. This comes as Russia and Ukraine’s latest round of talks ended with no progress, implying that there’s no end in sight yet for the war between the two, and its negative impact will continue to be felt by the global economy,” Philstocks Financial, Inc. Senior Research Analyst Japhet Louis O. Tantiangco said in a Viber message.

“Fears over an aggressive monetary tightening by the Federal Reserve have also resurfaced as the US’ inflation hit a 40-year high of 7.9% last February,” Mr. Tantiangco added.

US consumer prices surged in February, forcing Americans to dig deeper to pay for rent, food and gasoline, and inflation is poised to accelerate even further as Russia’s war against Ukraine drives up the costs of crude oil and other commodities, Reuters reported.

The consumer price index (CPI) increased 0.8% last month after gaining 0.6% in January. A 6.6% rebound in gasoline prices accounted for almost a third of the increase in the CPI.

In the 12 months through February, the CPI shot up 7.9%, the biggest year-on-year increase since January 1982. That followed a 7.5% jump in January and was the fifth straight month of annual CPI readings north of 6%.

For this week, all eyes will be on the Fed’s policy review on March 15-16, where it is expected to start raising interest rates, analysts said.

With inflation nearly four times the US central bank’s 2% target, economists are expecting as many as seven rate hikes this year, Reuters reported.

“The adverse effects of the increased sanctions on Russia would lead to employment losses, reduction in exports and investments, and other lost business and economic activities as an increasing number of US and global companies decided to stop doing business with Russia,” Mr. Ricafort added.

Efforts to isolate Russia economically have stepped up, with the United States imposing new sanctions on senior Kremlin officials and Russian oligarchs on Friday. — L.M.J.C. Jocson with Reuters