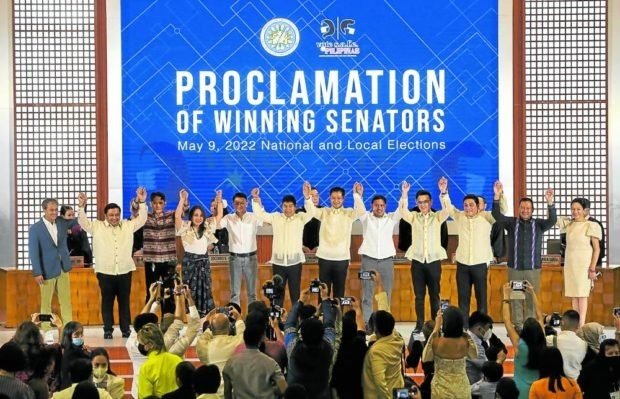 MANILA, Philippines — The Commission on Elections (Comelec) on Wednesday proclaimed the 12 winners in the senatorial race, including four reelectionists, three first-timers, and five former senators.

With only one reelectionist senator and another still keeping his seat in the chamber, who both are not backed by either outgoing President Rodrigo Duterte or the incoming presumptive President Ferdinand Marcos Jr., the Senate will have a formidable bloc that the country’s new leaders can rely upon for their legislative program.

Also, for the first time in Philippine Senate history, there will be three sets of family members serving together as senators — two siblings, two half-brothers, and a mother and her son.

Of the winners, Padilla, Tulfo, Cayetano, and Ejercito got the support of the President while Marcos supported Estrada and Escudero, who was also a guest candidate of the opposition led by Vice President Leni Robredo.

The candidates who were supported by both Mr. Duterte and Marcos were Legarda, Gatchalian, Villar, Zubiri, and Villanueva.

All of them can expect solidarity from most of the 12 pro-Duterte senators who were elected in the 2019 midterm elections, including Marcos’ elder sister, Sen. Imee Marcos.

Malacañang said Filipinos elected “old and new faces” in the Senate and that there was now a “sense of hope and optimism with the new set of lawmakers.”

“It is now time to move forward after a divisive election campaign and begin the daunting task of speeding up our economic recovery affected by the COVID-19 pandemic. Let us work closely together and pray for our nation’s success,” acting presidential spokesperson Martin Andanar said in a statement.

For the first time, the two estranged sons of former President Joseph Estrada — JV and his half-brother Jinggoy — will be serving together as senators. Cayetano will again be working alongside his sister, Pia. The two Villars will be the second mother-son team in the Senate after Jinggoy served with his mother, Loi Ejercito-Estrada from 2004 to 2007.

Sen. Aquilino Pimentel III said the new set of pro-administration senators must give their minority colleagues the freedom to choose their own leaders after word spread that the majority held a caucus and considered Cayetano as head of the minority bloc.

“They shouldn’t do that,” Pimentel said in a forum, adding that the Senate should not become a “rubber stamp” of the president.

“Structurally, we must have a real minority in the Senate to check on the majority, to make sure there will be no tyranny of numbers,” he said. “We must be careful not to have a government that allows only for a monolithic thinking.”

As a rule, senators who did not vote for the winning Senate president will comprise the minority, who in turn, will choose among themselves their minority leader, Pimentel said.

Pimentel was a former Senate president and he headed the Partido Demokratikong Pilipino-Lakas ng Bayan (PDP-Laban), whose faction lost recognition from the Commission on Elections (Comelec) to its Duterte-backed rival led by Energy Secretary Alfonso Cusi.

At this point, only he and Hontiveros can be considered the real opposition in the Senate.

Pimentel said the minority’s role will be mainly to see to it that all laws passed by the senators conform with Senate rules and the 1987 Constitution.

According to Sen. Juan Edgardo Angara, the goal of pro-administration senators is to establish a “supermajority,” and a Senate president with an assured backing of at least 16 of the 24 senators.

He said Zubiri and the elder Villar were supposedly interested in becoming Senate president and that the presumptive president’s sister and Legarda were rumored to be among those seeking the position of Senate president pro tempore.

“Our hope is that the supermajority bloc will not break up and the groups will eventually agree because we need to have a Senate that will work well together,” he said.

No one has signified interest in heading the powerful Senate committee on good government and accountability, or the Senate blue ribbon committee, which is generally handled by a lawyer. The committee led the Senate investigation of the Pharmally scandal.

Hontiveros said she was willing to cooperate with other senators “to fight for a society with dignity, justice, and equality.”

Hontiveros, who was the only opposition senatorial candidate who won in this year’s elections, was emotional.

“I can’t help but think that it’s almost a miracle that I’m standing before you today,” she said, thanking her family and supporters and “all of us Filipinos dreaming of a better life.”

“We always said during the campaign we were just heading to the ‘exciting part.’ I think nobody knew that it would be this exciting. Now it’s not only the exciting part but also the next six years.

“It’s an honor to be given this new mandate … let’s look after each other, no one should be left behind. The fight continues,” she added.

Open to be minority

He handled the Senate’s labor and technical and vocational education committees in the 18th Congress.

He was accompanied by his wife, Gladys, and his father, evangelist Eddie Villanueva.

He said that although he experienced a drop in the pre-election surveys, he said it did not deter him from seeking reelection as “my solid track record will speak for itself.”

Padilla, who has embraced Islam, said his victory was a symbol of unity between Muslims and Christians.

He called on newly elected officials and senators to give reforms in the Constitution a chance. He had attributed his victory to his push for federalism and Charter change.

“The people’s gripes about salary, unemployment, education… all of these will be addressed if we tackle reforms in the Constitution,” he said in Filipino.

Cheers greeted Escudero, who came with his wife, actress Heart Evangelista, although louder cheers and shrieks welcomed Padilla when he entered the PICC Tent.

“I hope that healing will start today,” he said. “Whatever colors we bannered during the elections, I hope we all change them to red, blue, white, and a little yellow. I hope we carry only the colors symbolizing our flag, because in the end, we’re all Filipinos and we’re all in one boat called Philippines.”

Zubiri called for a stop to “all the bickering.”

“Let us all work together, united as one family, as one country. We need to end poverty and now is the time to do it. We must unite as a people,” he said.

The elder Villar and her husband, former Sen. Manny Villar, were there for their son, Mark, while Pia accompanied her brother, Alan Peter, to the proclamation program.

The majority of the new senators-elect are so-called “martial law babies” who were born around the time Marcos Jr.’s father, the late ousted dictator Ferdinand Marcos, began his nearly 21-year rule before a popular revolt ended it in 1986.

Five of them were born in 1969 when Marcos Sr. won a second four-year term.

Padilla, Escudero, Zubiri, Estrada and Ejercito are either 53 years old or turning 53 this year.

Cayetano is one year younger as he was born in 1970 when anti-Marcos protests were spreading across the country.

Gatchalian, 48, Villanueva, 45, and Villar, the youngest who will turn 44 this year, were all born after the 1972 declaration of martial law by Marcos Sr.

Hontiveros is 56 years old. Legarda and Tulfo are both 62 and born in 1960 before Marcos Sr. was first elected president in 1965.

Legarda said the problems of the country in 1998 when she was first elected to the Senate “are still here.” The country should address the “twin crises” of the pandemic and climate change, she said.