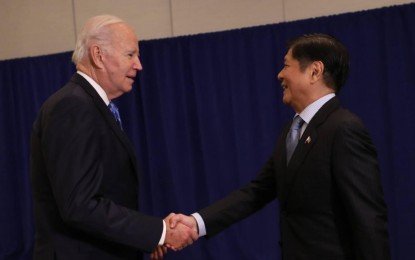 MANILA – President Ferdinand “Bongbong” Marcos Jr. on Thursday assured US President Joe Biden that the Philippines remains a “partner, ally, and friend” of the United States.

Marcos made the assurance during his bilateral meeting with Biden at the Intercontinental Hotel in New York City.

“We are your partners, we are your allies, we are your friends. And in like fashion, we have always considered the United States our partner, our ally and our friend,” Marcos, who is in the US for a working visit, told Biden.

“The relationship, the 100-plus-year-old relationship between the Philippines and the US continues to evolve as we face the challenges of this new century and the events that we have been watching over the past few months really,” he added.

The US and the Philippines established their formal diplomatic relations in 1946.

Over four million Filipinos currently reside in the US, while nearly 300,000 Americans, including a large number of US military veterans, live in the Philippines.

Marcos said the Philippines is “fortunate” to maintain its “very long” and “strong” relations with the US.

“We feel that we are especially fortunate because we have a very strong foundation of a very long relationship and strong relationships on various facets not only political, not only diplomatic, but also economic. And of course there is the very large Filipino population that has chosen to live and make their lives here in the United States and have been very successful,” he said.

The US is the Philippines’ third largest trading partner and second major source of foreign direct investment applications in 2021.

It is also the biggest source of remittances from overseas Filipino workers (OFWs) and Filipino-Americans.

Marcos told Biden that Manila is “very grateful” to Washington D.C. for its “massive” assistance to the Philippines amid the coronavirus disease 2019 (Covid-19) pandemic, including its donation of the vaccines against the coronavirus.

He also cited the US’ role in maintaining peace, saying it is “something that is much appreciated by all the countries in the regions and the Philippines especially.”

“We continue to look to the United States for that continuing partnership and the maintenance of peace in our region. In terms of the geopolitical issues that we face in this day and age, the primary consideration of the Philippines and the guiding principle of the Philippine foreign policy is to encourage peace,” he said.

“And I hope that we will be able to discuss further the roles that our two countries will play together and individually as we continue down that road — maintaining peace despite all the complexities that have arisen in the past few months I suppose,” Marcos added.

Biden acknowledged that the US’ relationship with the Philippines has “very deep roots,” despite the “rocky times” when the two nations became “critical” of each other.

“Our foundations are strong with the US-Philippine alliance which has critical importance. For decades, our alliance has strengthened both of us I believe and one of the things we want to talk about today is how we continue to strengthen it and work together on the things that have greatest concern to you,” he said.

Biden also expressed intent to expand the US’ bilateral cooperation with the Philippines in the fields of energy security and renewable energy.

“I was impressed with the work you did on windmills and a whole range of other things. You and I both think that’s the future we can do a lot — we can do a lot together. I’m desperately interested in making sure we do,” he told Marcos.

The two leaders also discussed the South China Sea issue, Russia-Ukraine crisis, the rise in energy and food prices, and the importance of respect for human rights.

In a press conference in New York City, Press Secretary Trixie Cruz-Angeles noted that while Biden received a “lot of requests” for a bilateral with world leaders, he only spoke with Marcos on the sidelines of the UN General Assembly.

“While it’s true he (Biden) spoke with one other person, that was a postponed meeting. And so all the more it becomes significant that President Marcos has been able to speak with the US President,” Cruz-Angeles said. (PNA)