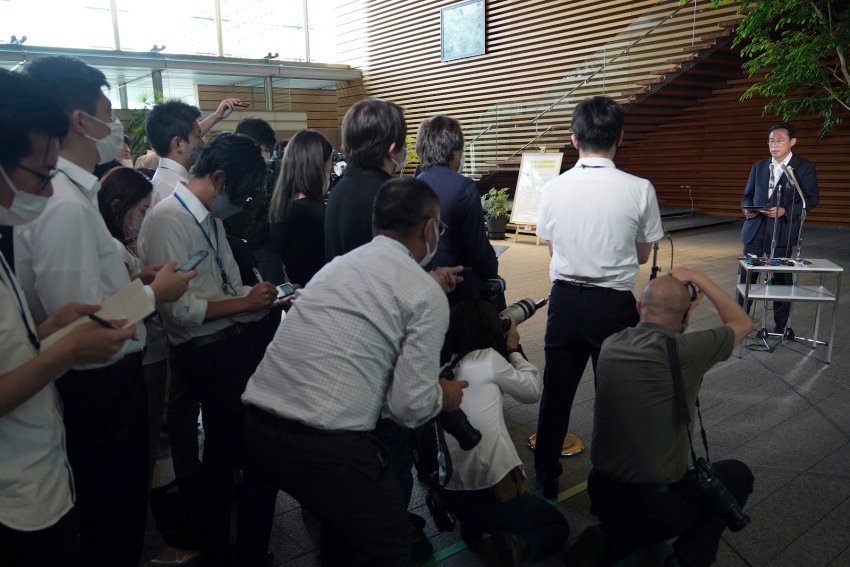 Former Japanese Prime Minister Shinzo Abe, an arch-conservative and one of the country’s most divisive figures, was shot and critically wounded during a campaign speech Friday in Nara. He was airlifted to a hospital but officials said he was not breathing and his heart had stopped.

Police arrested the suspected gunman at the scene of the shocking attack in a country that’s one of the world’s safest and has some of the strictest gun control laws anywhere.

Prime Minister Fumio Kishida said Abe was in “a severe condition.” He called the attack “dastardly and barbaric” and added that the crime occurring during the election campaign, which is the foundation of democracy, was absolutely unforgivable.

Kishida and his cabinet ministers hastily returned to Tokyo from other campaign events around the country after the shooting. “I’m praying for former Prime Minister Abe’s survival from the bottom of my heart,” Kishida said at the prime minister’s office after he arrived on a defense helicopter from Yamagata.

He said Abe was receiving the utmost medical treatment. Abe, who is 67 and was Japan’s longest-serving leader before stepping down in 2020, was in a state of cardiopulmonary arrest as he was being airlifted to the hospital, local fire department official Makoto Morimoto said.

NHK public broadcaster aired dramatic footage of Abe giving a speech outside of a main train station in Nara. He is standing, dressed in a navy blue suit, raising his fist, when a gunshot is heard. Footage then shows Abe collapsed on the street, with several security guards running toward him. He is holding his chest, his shirt smeared with blood. Reports said he was hit in the left side of his back and the right side of his neck.