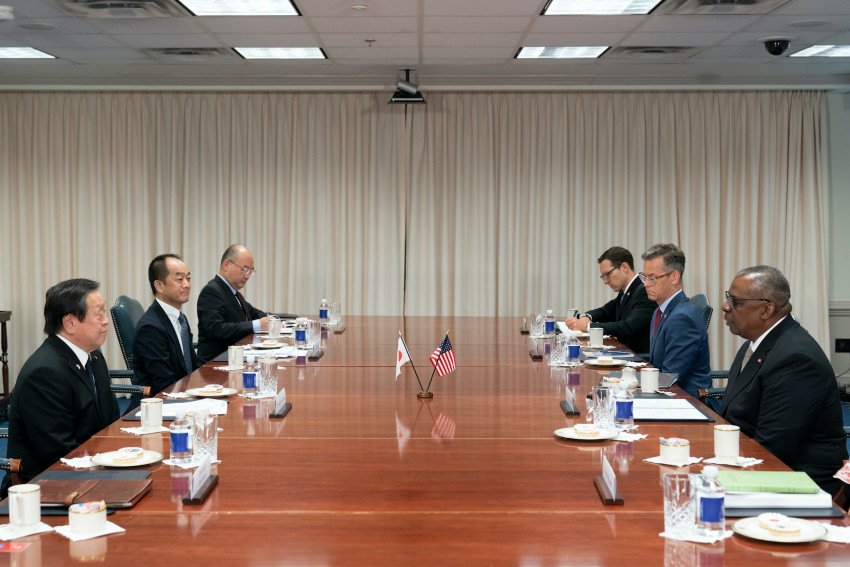 WASHINGTON – Japan and the United States agreed on joint technological research to counter hypersonic weapons, Japanese Defense Minister Yasukazu Hamada said Wednesday, as the two countries work to closely align their security strategies in the face of China’s growing assertiveness in the region.

The agreement was reached during talks between Hamada and his U.S. counterpart Lloyd Austin at the Pentagon, their first in-person meeting since Hamada replaced Nobuo Kishi as defense minister in early August.

Japan and the United States are seeing an increasing need to beef up their alliance’s deterrence and other capabilities amid concerns that the rules-based international order is being challenged by countries such as China and Russia.

Tensions have also increased over Taiwan following a trip to the self-ruled democratic island in early August by U.S. House of Representatives Speaker Nancy Pelosi, the third-highest-ranking U.S. official.

Criticizing China for launching ballistic missiles as part of its large-scale exercises near Taiwan following Pelosi’s visit, Hamada and Austin affirmed the importance of peace and stability across the Taiwan Strait and that a unilateral change in status quo by force in the region is unacceptable.

Japan and the United States will cooperate “closely and seamlessly” toward preventing any such attempts, Hamada said.

Beijing considers Taiwan a breakaway province to be reunified with the mainland, by force if necessary. The island is viewed as a potential military flashpoint that could draw the United States into conflict with China.

A Taiwan contingency is also of particular concern for Japan, a U.S. security ally, given the proximity of its islands in the southwest — including the Senkakus, a group of East China Sea islets controlled by Tokyo but claimed by Beijing.

The Japanese defense minister also told reporters after the meeting that Austin showed “strong” support for Japan’s plan to fundamentally bolster its defense capabilities through a planned update of its national security documents and with a substantial increase in its defense budget.

The defense capabilities that Japan is currently examining include an ability to attack missile-launching sites in an enemy’s territory, which the Asian country has so far opted not to acquire under the post-World War II pacifist Constitution.

Japan plans to update its National Security Strategy by the end of this year, reflecting the region’s increasingly challenging security environment. It would be the first revision of the long-term security and diplomacy policy guideline since it was adopted in 2013.

In March, the U.S. administration of President Joe Biden unveiled an outline of its own National Defense Strategy, calling China its “most consequential strategic competitor” and vowing to prioritize the challenges posed by China over those by Russia.