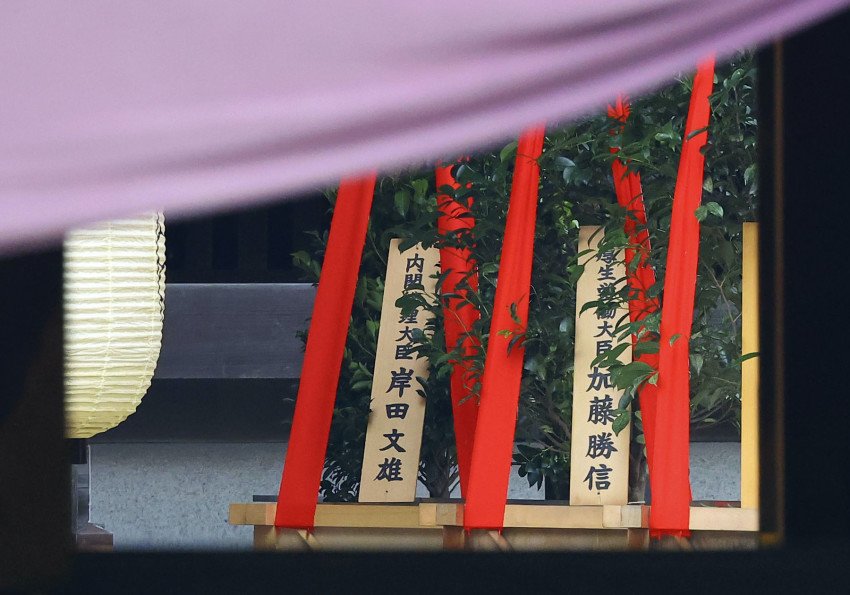 TOKYO – Prime Minister Fumio Kishida on Monday sent a ritual offering to the war-linked Yasukuni shrine in Tokyo, a source of diplomatic friction with some Asian neighbors who view it as a symbol of Japan’s past militarism.

Kishida sent the masakaki ceremonial tree on the occasion of the Shinto shrine’s autumn festival, but he is likely to refrain from paying a visit during the two-day festival through Tuesday, people close to him said.

Yasukuni shrine honors the souls of the nation’s more than 2.4 million war dead, but Japanese leaders convicted as war criminals by a post-World War II international tribunal are also enshrined there.

Past visits to the shrine by Japanese prime ministers, including assassinated former leader Shinzo Abe, and lawmakers have drawn harsh criticism from China and South Korea, where memories of Japan’s wartime actions run deep.

Matsuno said Kishida made the offering “as a private person” rather than a public figure, although the masakaki was sent with a board stating “prime minister.”

Last Friday, Yasutoshi Nishimura, economy, trade and industry minister, visited Yasukuni ahead of its autumn festival beginning Monday, according to sources close to him.

The shrine said Monday that among Cabinet members, health minister Katsunobu Kato sent an offering, while Hidehisa Otsuji, president of the House of Councillors, followed suit.

A cross-party group of lawmakers, meanwhile, is expected to visit the shrine on Tuesday. The group last visited the religious facility en masse in April for its spring festival.

Japan invaded a wide area of China, while it ruled the Korean Peninsula from 1910 to 1945.

In December 2013, Abe paid a visit to the shrine, triggering a strong backlash from Beijing and Seoul. The United States, Japan’s key security ally, also said it was “disappointed” by Abe’s action, which it said would “exacerbate tensions with Japan’s neighbors.”

Apparently to avoid confrontation with China and South Korea, recent prime ministers have sent offerings to the shrine at the time of its biannual festivals in the spring and autumn as well as the anniversary of the end of World War II on Aug. 15.

China and South Korea, however, have always quickly criticized such actions.

In 1978, Yasukuni added 14 Class-A war criminals, including wartime Prime Minister Hideki Tojo who was executed by hanging for crimes against peace, to the enshrined deities, stirring controversy in Japan and abroad.

The seasonal festivals normally run for three days but have been shortened to two days as part of efforts to prevent the spread of the coronavirus, the shrine said.