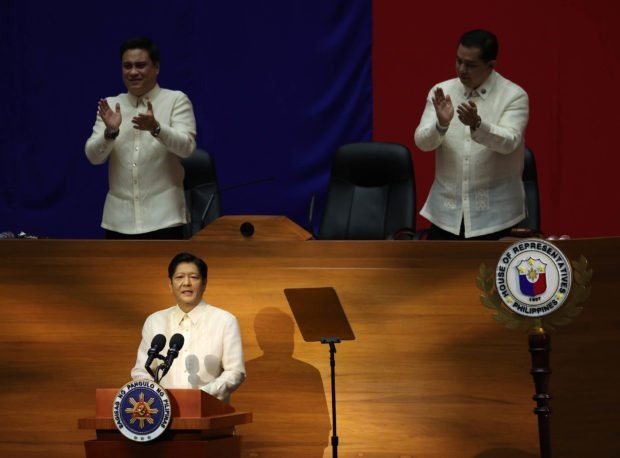 MANILA, Philippines — President Ferdinand “Bongbong” Marcos Jr. on Monday gave the Filipino people a more detailed preview of what his administration intends to accomplish in the next six years, highlighting the immediate need to resuscitate the pandemic-battered economy and to uplift the lives of marginalized farmers, debt-strapped agrarian reform beneficiaries, migrant workers and the poor.

In his first State of the Nation Address (Sona) before the joint session of Congress, the President also listed 19 legislative measures that he requested lawmakers to pass in order to achieve his administration’s various socioeconomic goals

In his speech that lasted an hour and 12 minutes which was applauded 84 times and delivered in a mix of English and Filipino, Marcos also touched on the delicate issue of the West Philippine Sea, promising that he “will not preside over any process that will abandon even a square inch of territory of the Republic of the Philippines to any foreign power.”

The most applauded part of his Sona, aside from the conclusion, was his proposal to set up “specialty hospitals” in various parts of the country similar to the Philippine Heart Center, Lung Center of the Philippines, Philippine Children’s Medical Center and the National Kidney and Transplant Institute — projects built during his late father’s tenure — that are found in Metro Manila.

The president said he knew the hardships endured by the people in the past two years and the efforts they were doing to meet the challenges of the present.

“I do not intend to diminish the risks and challenges that we face in this turbulent time in global history, and yet, I see sunlight filtering through these dark clouds. We have assembled the best Filipino minds to help navigate us through this time of global crisis,” he said.

“We will endure. Let our Filipino spirit ever remain undimmed. I know this in my mind, in my heart, in my very soul that the state of the nation is sound,” he added.

The president called on Congress to pass a law condoning more than P58 billion in loans owed by some 654,000 beneficiaries of the government’s agrarian reform program.

Agrarian reform beneficiaries who are still to receive their awarded land under the Comprehensive Agrarian Reform Program shall receive it without any obligation to pay any amortization, according to Marcos.

He said the condonation of the existing agrarian reform loans would cover 1.18 million hectares of awarded lands.

While waiting for the law to be passed, the president said he intended to issue an executive order to impose a one-year moratorium on the payment of land amortization and interest payments, noting that such moratorium was provided under Republic Act No. 11469, or the Bayanihan to Heal as One Act.

“A moratorium will give the farmers the ability to channel their resources in developing their farms, maximizing their capacity to produce, and propel the growth of our economy,” he said.

He said he would also enforce Executive Order No. 75, series of 2019, issued by his predecessor, requiring all government agencies, bureaus, departments, and instrumentalities to turn over agricultural lands to qualified agrarian reform beneficiaries.

He said there were, at present, about 52,000 ha of unused agricultural lands of the government that would be distributed to landless war veterans, surviving spouses and orphans of war veterans, and retirees of the military and the police in accordance with RA 6657.

Under EO 75, agricultural lands would also be given to graduates of college degrees in agriculture who are landless.

The president also promised continuing assistance to the beneficiaries of the Pantawid Pamilyang Pilipino Program (4Ps), victims of calamities and the sick.

The president presented what he called Medium-Term Fiscal Strategy (MTFS) of his administration which seeks “to attain short-term macro-fiscal stability while remaining supportive of the country’s economic recovery and to promote medium-term fiscal sustainability.”

Marcos said he wanted Congress to adopt and concur with the MTFS by passing a concurrent resolution.

Measurable medium-term macroeconomic and fiscal objectives include 6.5-7.5 percent real gross domestic product (GDP) growth in 2022, and 6.5-8 percent annually between 2023 to 2028; 9 percent or single-digit poverty rate by 2028; 3-percent national government deficit-to-GDP ratio by 2028; less than 60 percent national government debt-to-GDP ratio by 2025, and at least $4,256 income per capita to attain upper middle-income status by 2024.

Once adopted, the MTFS will become an anchor for the annual spending and financing plan of the national government and Congress when preparing the annual budget and undertaking related appropriation activities.

“Our tax system will be adjusted in order to catch up with the rapid developments of the digital economy, including the imposition of value-added tax on digital service providers,” he said, adding that initial revenue impact of this would be around P11.7 billion in 2023 alone.

Tax compliance procedures will be simplified to promote ease of paying taxes, he added.

In the power sector, the President said the government must build new power plants and push for the use of renewable energy to lower the price of electricity in the country.

“We must build new power plants. We must take advantage of all the best technology that [is] now available, especially in the areas of renewable energy,” he said, receiving applause from the audience that included members of the country’s business elite.

According to him, the government must examine the entire system of transmission and distribution to lower the price of electricity to the consumer.

As a solution to cut electricity rates in the Philippines, the president said the country has already begun to use wind power and was now expanding the use of solar energy, which he noted “is practical almost everywhere in the Philippines all year round.”

He also assured the business community that the government would provide investment incentives by clarifying the uncertain policy in upstream gas, particularly in the area close to the Malampaya gas field in offshore Palawan.

He also pushed for the review of the possible revival and building of nuclear power plants in the country.

“We will comply of course with the International Atomic Energy Agency regulations for nuclear power plants as they have been strengthened after Fukushima,” he said, referring to the 2011 nuclear disaster in Japan.

In terms of infrastructure projects, the president said he would continue the Build, Build, Build program of the Duterte administration “but, wherever possible, be expanded.”

“A coordinated, international response is essential to stop the spread of monkeypox, protect communities at greatest risk of contracting the disease, and combat the current outbreak,” said Raj Panjabi, senior director for the White House’s global health security and biodefense division.

A surge in monkeypox infections has been reported since early May outside the West and Central African countries where the disease has long been endemic.

Overall, 98 percent of infected people were gay or bisexual men, and around a third were known to have visited sex-on-site venues such as sex parties or saunas within the previous month.

Tedros has previously expressed concern that stigma and scapegoating could make the outbreak harder to track.

On June 23, the WHO convened an emergency committee of experts to decide if monkeypox constitutes a so-called Public Health Emergency of International Concern—the UN health agency’s highest alert level.