Robot that stocks drinks is newest thing at FamilyMart in Japan 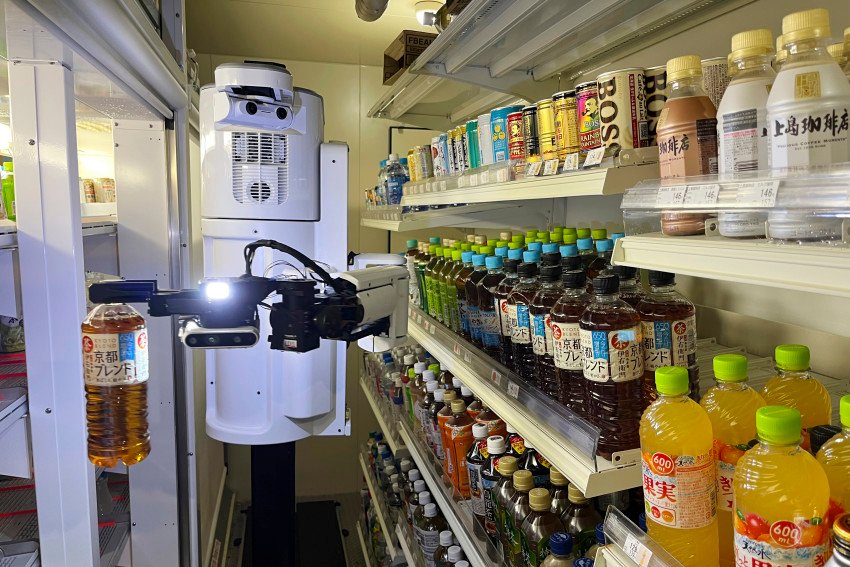 TOKYO – A small robot with a clip-like hand and enough smarts to know which drinks are popular is part of an effort to make convenience stores even more convenient.

On a recent day in Tokyo, the robot named TX SCARA slid back and forth behind the refrigerated shelves in the back of a FamilyMart store.

The hand on the end of its mechanical arm grasped a bottle or can from the stacks to the side, then the robot slithered to the right spot and placed the drink on the shelf — in a place chosen after its artificial intelligence and tiny cameras matched the kind of beverage to what’s running short.

TX SCARA is filling a needed role in Japan’s “conbini,” as the ubiquitous tiny stores selling snacks, drinks and knick-knacks are called.

Most such stores are open 24-seven, filled with 3,000 kinds of products, but have relatively few workers. The beverage shelves in the back are farthest from the cash register, keeping workers running back and forth. And the beverage space is refrigerated, uncomfortably cold for people to stay there too many hours.

TX SCARA, which goes at an undisclosed price, can restock up to 1,000 bottles and cans a day. Its artificial intelligence, called “GORDON,” knows when and where products need to be placed on shelves, according to Tokyo-based Telexistence, which created TX SCARA.

“We want to automate all the repetitive jobs and boring jobs done by humans. That is the direction we are going. And the best way to do that is to use the robots,” Chief Executive Jin Tomioka said.

Industrial robots are already common in factories, but Tomioka’s 50-employee company sees great potential at warehouses and home centers, he said. His robots are far more affordable than industrial robots, such as those at auto plants, but can prove just as crucial for social needs, designed to coexist and collaborate with people, helping out with routine and rudimentary tasks.

Tomioka’s robots are tailored for existing stores, which don’t have to change their layout or routine. Their hardware uses Nvidia GPU-accelerated AI technologies to allow for remote control over Azure, the cloud computing service operated by Microsoft.

A Telexistence operator wearing virtual reality glasses can see problems when they occur, such as a dropped beverage, and fix them from the company office.

With its aging population, Japan has a labor shortage that’s expected to only get more severe in coming years.

FamilyMart Executive Officer Tomohiro Kano referred to the Japanese expression “seeking even a cat’s paw for help” to describe how desperate a situation might get. “At FamilyMart, we are seeking a robot’s arm for help,” he said with a laugh.

While modern robots are taking on serious work like mapping disaster zones and helping doctors perform surgery, the humble TX SCARA tirelessly does the unglamorous work of stocking shelves with bottled tea and orange drinks.

IT worker Taisuke Miyaki watched the robot working as he peered into the beverage shelf. He acknowledged he hadn’t noticed it before although he shops at FamilyMart often, especially for his favorite bottled jasmine tea.

“Come to think of it, the shelves are always nicely stocked lately,” he said.