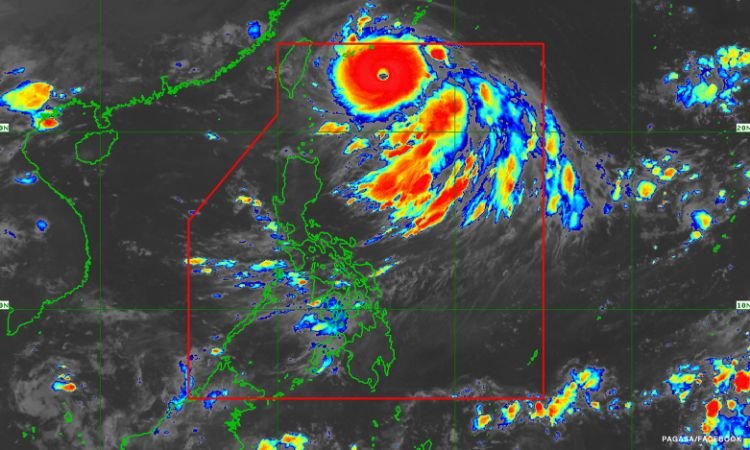 In its 5 a.m. bulletin, the Philippine Atmospheric, Geophysical and Astronomical Services Administration (PAGASA) spotted Henry 530 kilometers (km) east northeast of Itbayat, Batanes, maintaining maximum strong winds of 185 kilometers per hour (kph) and gusts of up to 230 kph near the center as it moves southwestward at 25 kph.

PAGASA said Henry is forecast to continue moving generally southwestward, near the location of Gardo. The latter is seen to weaken into a low pressure area in 12 hours or sooner.

[Translation: The two tropical cyclones are almost near each other, and we can see Super Typhoon Henry’s strength compared to Tropical Depression Gardo. In a few hours, Gardo may weaken into a low pressure area and will be absorbed by Henry until it dissipates.]

Gardo was spotted 885 km east northeast of extreme northern Luzon as it moved northwestward at 45 kph. It packed winds of 55 kph and gusts of up to 70 kph.

PAGASA earlier said the merger of Gardo and Henry may also enhance the southwest monsoon or “habagat” and trigger heavy rains over Luzon this week. Raising Signal No. 2 over extreme northern Luzon areas is still a possibility.

In the next 24 hours, the super typhoon may cause moderate to rough seas at the eastern seaboard of Isabela which may be risky for those using small seacraft.

National Disaster Risk Reduction and Management Council (NDRRMC) spokesperson Raffy Alejandro told CNN Philippines’ New Day that the agency is coordinating with local government units, especially those in Ilocos region and Cagayan Valley, in preparation for the impact of the super typhoon.

He said the agency might raise a red alert status over areas that will be affected. Under this status, all regional DRRM offices nationwide will be connected to NDRRMC’s operations center in Metro Manila for easy coordination.

It may slightly intensify again once it begins accelerating northward during the weekend, it also said.