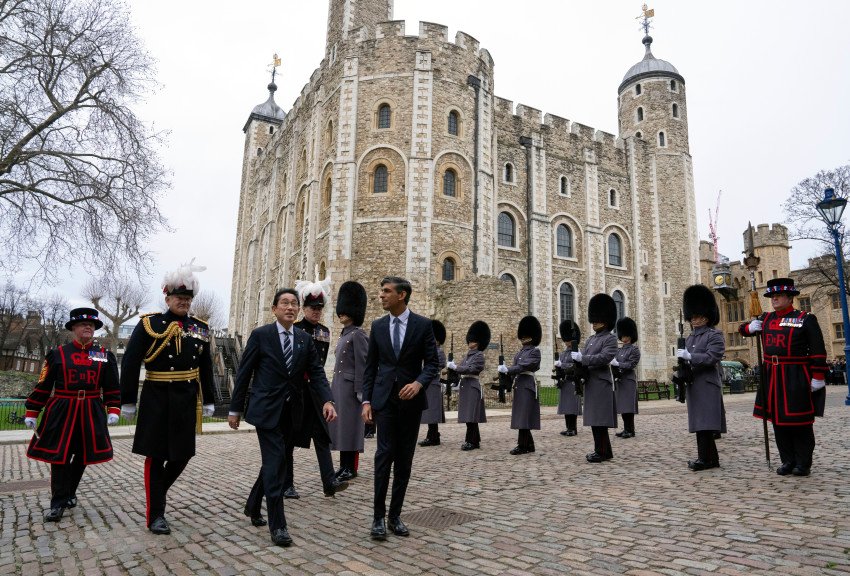 LONDON –  The leaders of Britain and Japan signed a defense agreement Wednesday that could see troops deployed to each others’ countries.

The two countries are strengthening military ties amid growing concern about China’s increasing military assertiveness and designs toward Taiwan, which it considers a renegade province.

Prime Minister Rishi Sunak and Japanese Prime Minister Fumio Kishida formally signed the agreement in the symbolic setting of the Tower of London fortress. The British government said the it “cements our commitment to the Indo-Pacific” region.

“The relationship between our two countries is stronger than ever, not just across trade and security, but also our values,” Sunak told his Japanese counterpart.

Kishida, referring to the importance of security and cooperation between Japan and the UK, said he hoped he and Sunak would have a “strategic discussion.”

The Reciprocal Access Agreement, Japan’s first defense agreement with a European nation, allows the two Group of Seven countries to hold joint military exercises. The deal had been in the works for years and was discussed when Kishida visited then-Prime Minister Boris Johnson in London in May.

The British government said it will allow the armed forces of the UK and Japan “to plan and deliver larger and more complex military exercises and deployments.”

The agreement reflects a new “Indo-Pacific tilt” in Britain’s foreign policy following the country’s departure from the European Union in 2020. Britain sees Japan as its key East Asian ally.

“In this increasingly competitive world, it is more important than ever that democratic societies continue to stand shoulder to shoulder as we navigate the unprecedented global challenges of our time,” Sunak said.

During their meeting at the Tower of London, a 1,000-year-old former palace and prison that houses the Crown Jewels, the leaders viewed Japanese armor presented to King James in 1613 by Shogun Tokugawa Hidetada of Japan to mark the first-ever trade agreement between England and Japan.

Japan has joined Western nations in condemning Russia’s invasion of Ukraine and imposing sanctions against Moscow. Japan also has supplied Ukraine with helmets and other non-lethal military aid.

Japan is concerned Russia’s invasion of Ukraine could have an impact in East Asia, where China’s military has grown increasingly assertive and threatened to unite with Taiwan by force if necessary.

Concerned about rapid weapons advancement in China and North Korea, Japan in December adopted key security and defense reforms, including a counterstrike capability that makes a break from the self-defense-only principle it has maintained since its defeat in World War II.

Japan holds the presidency of the G7 this year, and Kishida is on a weeklong trip to visit allies including Italy, France, Canada and the United States, where he is due to meet President Joe Biden at the White House on Friday.

© Copyright 2023 The Associated Press. All rights reserved. This material may not be published, broadcast, rewritten or redistributed without permission.