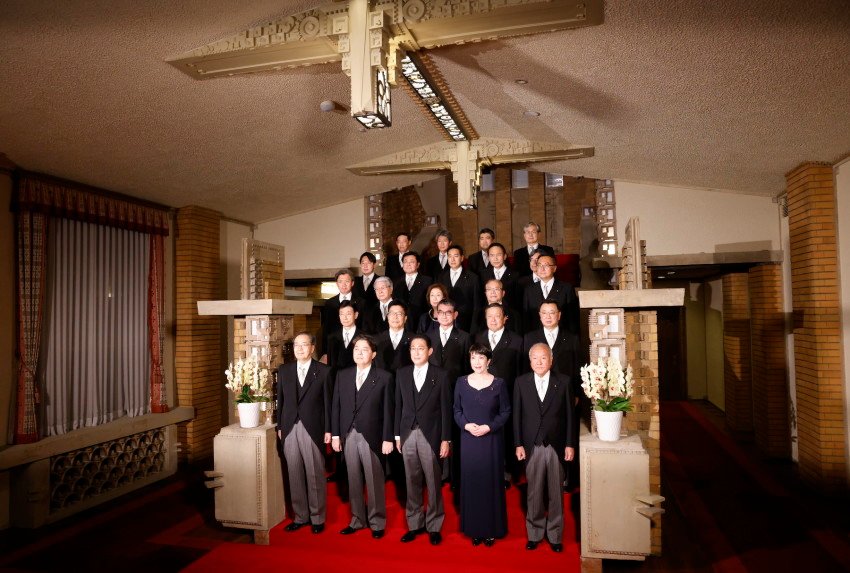 At least five members of Japanese Prime Minister Fumio Kishida’s new cabinet were revealed Wednesday to have had relations with the Unification Church, despite a reshuffling that was aimed at purging links to the controversial religious group amid plummeting public support.

The revelations, made by the cabinet members to the press, came as the revamp replaced seven ministers found to have had links with the church, including former defense minister Nobuo Kishi, the younger brother of former Prime Minister Shinzo Abe, who was fatally shot last month.

“I have only appointed (to the cabinet) those who have agreed to examine their ties (to the church) and impartially review it based on the findings,” Kishida said at a press conference.

“We do not recognize that the Unification Church’s policies have inappropriately influenced those of the LDP’s,” he added.

Koichi Hagiuda was moved to the pivotal post of LDP policy chief, despite earlier revelations that he had given a speech at an event related to the church.

When asked at a press conference Wednesday if he would sever all ties with the group, Hagiuda said, “for our part, we will continue to make a clear distinction (between the party and church).”

Among new cabinet members appointed Wednesday, Minoru Terada, a special adviser to Kishida named the new minister of internal affairs, said he paid 20,000 yen in October 2018 to attend an event organized by a group affiliated with the church, although he was not aware of it at the time.

Terada told reporters he ultimately did not attend due to scheduling issues and that he had never received any donations or campaign support from the group.

Akihiro Nishimura, the new environment minister, also said he had not been aware the church was involved in an event he had previously attended, thinking it was a “conservative forum.”

Meanwhile, Katsunobu Kato, who returned to his former post as health minister, and Daishiro Yamagiwa, who retained his post as economic revitalization minister, both admitted to having previously paid “membership fees” to organizations affiliated with the church.

Foreign Minister Yoshimasa Hayashi, who retained his post, apologized for accepting an interview in 2012 with Sekai Nippo, a publication known to have close ties to the Unification Church, but said that he had not received donations or election support from the group.

LDP policy chief Sanae Takaichi, named minister for economic security, said she was featured in a monthly magazine released by a publisher affiliated with the church in 2001.

The controversy over the church, now formally known as the Family Federation for World Peace and Unification, began after Abe’s killer told investigators that his mother’s donations to the religious group had ruined their family’s fortunes and he held a grudge against it.

“Despite (the LDP) saying it would conduct an impartial review, they have not clarified the links between many lawmakers and the church, which does not inspire public trust,” Izumi said.

Tomihiro Tanaka, head of the church’s Japan branch, said at a press conference Wednesday that he would find it “extremely regrettable if involvement with our organization was the criteria” for the cabinet reshuffling.