Gov’t holds annual disaster drill, scaled back due to COVID 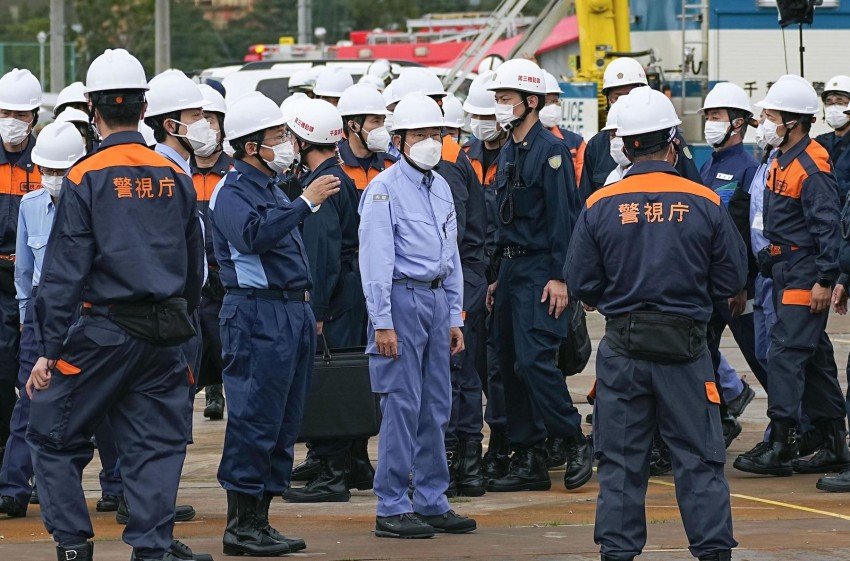 TOKYO – The government held an annual disaster drill Thursday, though again scaling it back to prevent the spread of COVID-19, based on the scenario that a massive earthquake originating off Japan’s Pacific coast had affected wide areas.

The drill took place on the 99th anniversary of a magnitude 7.9 temblor that devastated Tokyo and its neighboring prefectures in 1923, with Prime Minister Fumio Kishida joining the inter-prefectural exercises via helicopter.

Because of the quake, Sept. 1 is designated as Disaster Prevention Day and disaster drills are held across the quake-prone country every year to raise public awareness and disseminate disaster prevention knowledge.

The central government’s drill was based on the scenario that a magnitude 9.1 earthquake had occurred at around 7:10 a.m. in the Nankai Trough off the coast of Wakayama Prefecture in western Japan.

“We will devote all of our energy toward disaster prevention measures, with saving lives being first and foremost,” Kishida said at an emergency meeting convened at the prime minister’s office as part of the drill.

Kishida ordered those in attendance, including Land, Infrastructure, Transport and Tourism Minister Tetsuo Saito and National Public Safety Commission Chairman Koichi Tani, among other Cabinet ministers, to keep track of the extent of the damage.

“A major tsunami has reached the shore,” Aichi Gov Hideaki Omura reported via video link, as part of the drill.

Following the mock report and request for government aid, the ministers adopted a basic policy on dealing with the disaster emergencies at an extraordinary Cabinet meeting.

After the meeting, Kishida held a mock press conference explaining the confirmed extent of the disaster, from destruction of buildings, major fires and flooding caused by the tsunami.

“Please take action to save lives,” he said, adding there was a high possibility of another major earthquake. “We ask those who live from the Kanto region to Kyushu along the Pacific coast to secure your furniture and prepare for disaster.”

To attend the meeting at the prime minister’s office, ministers walked to the venue in the rain from their residences or offices as part of the drill, on the assumption that they would not have access to cars or public transportation.

A Buddhist memorial service was separately held at Yokoamicho Park in Tokyo to commemorate the people who lost their lives in the 1923 earthquake, as well as one for the Korean victims of a massacre that followed the temblor.

The Great Kanto Earthquake, which originated in Sagami Bay off Kanagawa Prefecture, is estimated to have killed over 105,000 people.