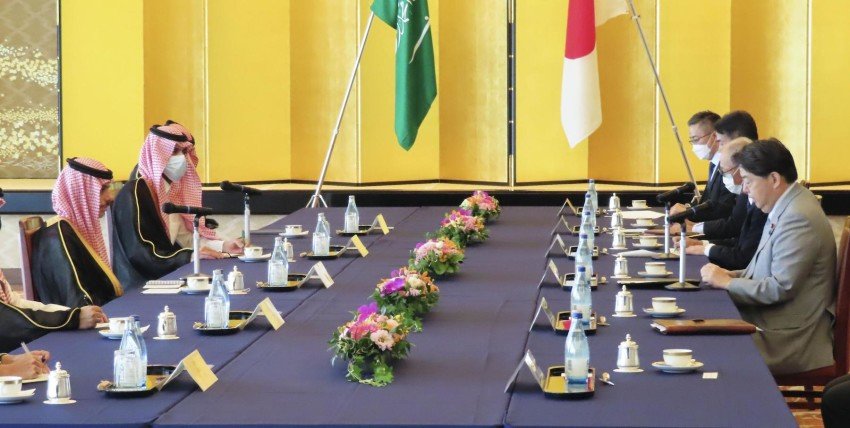 The foreign ministers of Japan and Saudi Arabia agreed Tuesday that the two nations will work together to stabilize the global oil market as oil prices have surged following Russia’s invasion of Ukraine.

During their meeting in Tokyo, Yoshimasa Hayashi also asked his Saudi Arabian counterpart, Prince Faisal bin Farhan Al-Saud, for cooperation in an additional oil output increase by the Organization of the Petroleum Exporting Countries and its allies, known as OPEC Plus, according to the Japanese Foreign Ministry.

Biden conveyed his hope that Riyadh would take action to ensure the availability of adequate oil supplies but failed to reach any agreements.

In late June, OPEC Plus decided to maintain its plan for August of increasing the members’ crude oil production despite pressure from Washington to further ratchet up the supply.

Since Russia launched military attacks against Ukraine in late February, Western nations, led by the Group of Seven major developed countries, have strongly condemned Moscow and imposed economic sanctions on it, including a ban or phase-out of oil imports from Russia, another major oil producer.

Concerns for crude oil supply have been further boosting its prices, which have already climbed on the back of robust demand resulting from the global economic recovery from the coronavirus pandemic.

At the meeting, Hayashi and Faisal also confirmed that they will continue close cooperation toward the peace and stability of the Middle East, the Japanese ministry said.

Earlier in the day, Faisal met with Prime Minister Fumio Kishida and said the strategic partnership between the two nations is solid. Kishida pledged to strengthen their bilateral ties.

Faisal, who was on a three-day stay in Japan from Sunday, conveyed his condolences to Kishida and Hayashi over the death of former Prime Minister Shinzo Abe, who was fatally shot during a stump speech earlier this month in western Japan, according to the ministry.