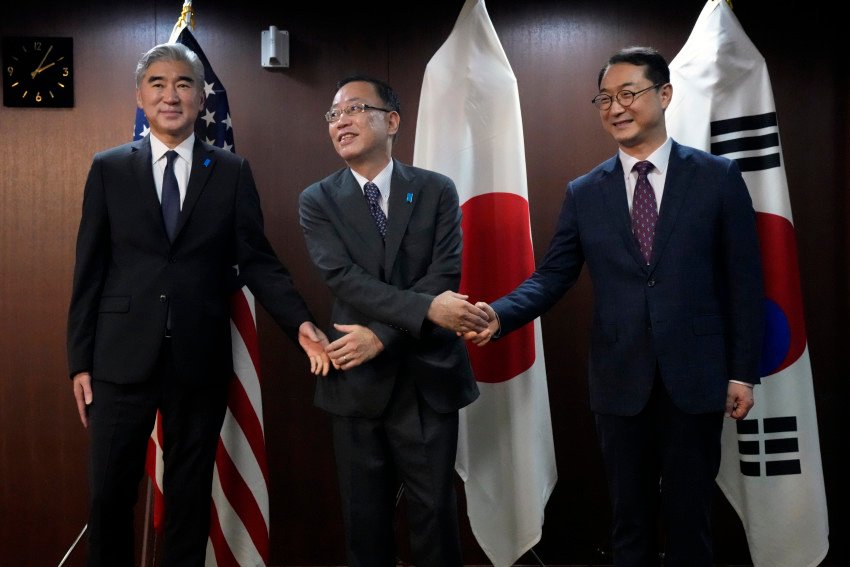 TOKYO – Diplomats from the United States, Japan and South Korea reaffirmed their commitment on Wednesday to working together in response to any threat from North Korea, including a possible new nuclear test.

The three senior diplomats in charge of North Korean affairs also underscored their efforts to strengthen their security partnership. Japan and South Korea acknowledge their need to improve bilateral and trilateral cooperation. Relations between Japan and South Korea have been badly damaged by historical disputes over Japan’s colonization of the Korean Peninsula.

Takehiro Funakoshi, director-general of the Asian and Oceanian Affairs Bureau of Japan’s Foreign Ministry, said the focus of the trilateral cooperation is North Korea and its accelerating nuclear and missile development.

Funakoshi said he and his U.S. and South Korean counterparts, Sung Kim and Kim Gunn, were to discuss their countries’ responses to North Korea as they work together to enhance regional deterrence amid “a looming possibility of further provocations including another nuclear test.”

North Korea last conducted a nuclear test, its sixth, in 2017, and experts have noted signs of preparations for another test.

Sung Kim, the U.S. special envoy for North Korea, said the three countries are prepared for “all contingencies … in responding to (North Korea’s) provocations” and to protect allies in the region.

Their goal of the complete denuclearization of the Korean Peninsula has not changed, Sung Kim said. “We remain committed to seeking dialogue with (North Korea) and are prepared to meet without preconditions,” he said.