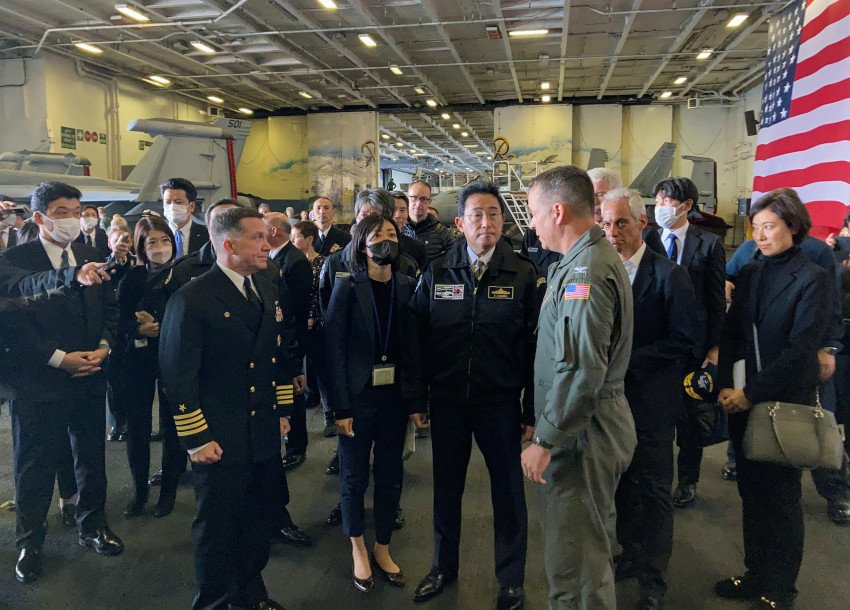 TOKYO – Prime Minister Fumio Kishida said at an international fleet review Sunday that his country urgently needs to strengthen its military capabilities as security risks increase including threats from North Korea’s nuclear and missile advancement and Russia’s war on Ukraine.

Eighteen warships from 12 countries participated in the review, including the United States, Australia, Canada, India, New Zealand, Singapore and South Korea, while the U.S. and France also sent warplanes.

South Korea joined for the first time in seven years, in the latest sign of improvement in badly strained ties between Tokyo and Seoul over Japan’s wartime atrocities.

“The security environment in the East and South China seas, especially around Japan, is increasingly becoming more severe,” Kishida said, noting North Korea’s increased missile firings, including one that flew over Japan last month, and growing concern about the impact in Asia of the Russian invasion of Ukraine.

Avoiding disputes and seeking dialogue is important, Kishida said, but it is also necessary to be prepared for provocations and threats to peace and stability. He repeated his pledge to significantly reinforce Japan’s military capability within five years.

“We have no time to waste,” Kishida said after his review aboard the JS Izumo, where naval officers from the participating countries gathered to review a demonstration of the frigates, submarines, supply ships and warplanes in Sagami Bay southwest of Tokyo.

The 248-meter-long Izumo has been retrofitted so that it can carry F-35Bs, stealth fighters capable of short take-offs and vertical landings, as Japan increasingly works side-by-side with the U.S. military.

Kishida said Japan will further strengthen the deterrence and response capability of the Japan-U.S. alliance.

Later Sunday, Kishida and U.S. Ambassador to Japan Rahm Emanuel visited the USS Ronald Reagan, the U.S. Navy’s only aircraft career based outside the U.S. mainland, off the U.S. naval base of Yokosuka.

Emanuel stressed the importance of cooperation among U.S. allies. “Every time we do things in either a bilateral capacity, trilateral capacity of any other type of exercises that also brings in others, that puts China on their back heels because they realize that’s the one thing they do not have is the one thing America has in abundance and we work at it extensively.”

The U.S. military, which had just finished a joint exercise with South Korea that prompted missile barrages and other warnings from North Korea, is set to hold major drills with Japan later this month in southwestern Japan. Australia, Canada and Britain will join part of the drills, while France, India, New Zealand, the Philippines and South Korea are expected to take part as observers.

Japan has steadily stepped up its international defense role and military spending over the past decade, and plans to double its military budget in the next five to 10 years to about 2% of its GDP, citing a NATO standard, amid threats from North Korea and China’s growing assertiveness.

China has reinforced its claims to virtually the entire South China Sea by constructing artificial islands equipped with military installations and airfields. Beijing also claims a string of islands that are controlled by Japan in the East China Sea, and has stepped up military harassment of self-ruled Taiwan, which it says is part of China to be annexed by force if necessary.

Kishida’s government is currently working on a revision to its national security strategy and mid- to long-term defense policies, and is considering allowing the use of preemptive strikes in a major shift to Japan’s self-defense-only postwar principle. Critics say preemptive strikes could violate Japan’s pacifist constitution.

Apparently addressing concerns from Asian neighbors, Kishida said Japan will stick to its postwar pledge as a “pacifist nation” and continue to explain its security policy to gain understanding while asking other countries to do the same.

Many of its neighbors, including South Korea, were victims of Japanese aggression in the first half of the 1900s, and an attempt by Japan to increase its military role and spending could be a sensitive issue.

Sunday’s international fleet review marks the 70th anniversary of the founding of Japan’s postwar navy, called the Maritime Self-Defense Force, seven years after Japan was demilitarized after its World War II defeat. The naval ships and warplanes were to participate in joint exercises later on Sunday and Monday.

It was the first time Japan hosted an international fleet review in 20 years. China did not take part but was expected to participate in the two-day Western Pacific Naval Symposium in Yokohama starting Monday with officers from about 30 countries discussing maritime security.