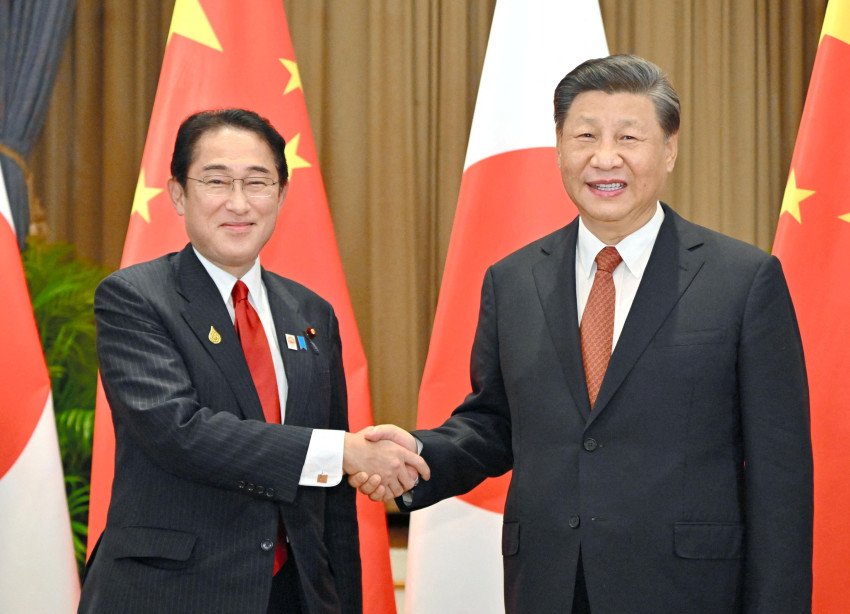 Xi was quoted by Chinese state broadcaster CCTV as telling Kishida that China and Japan should deepen trust, areas of cooperation and regional integration, and resist “conflict and confrontation”.

The two leaders met in Thailand on the sidelines of the Asia-Pacific Economic Cooperation (APEC) summit, marking the first leadership-level talks between the two countries in almost three years.

Regional tensions have been rising over self-governed Taiwan, which Beijing claims as its own territory. China has never renounced the use of force to bring Taiwan under its control, and earlier this year staged war games near the island.

The democratically-elected government in Taipei rejects Beijing’s claims and says only its people can decide its future.

Japan also lodged a diplomatic complaint in August after five ballistic missiles launched by the Chinese military fell into Japan’s exclusive economic zone, near disputed islands known as the Senkaku in Japan and the Diaoyu in China.

“I reiterated the importance of peace and security in the Taiwan Strait,” Kishida said to reporters after the summit, stopping short of suggesting how China responded to his concerns.

“I conveyed my grave concerns about the situation in the East China Sea, including the Senkaku Islands, as well as China’s military presence such as their launching of missiles,” Kishida added.

Xi told Kishida the issue of Taiwan needed to be handled properly and in good faith as it touched on the political foundation and basic trust of China-Japan relations, according to CCTV.

Xi then went on to say that “China does not interfere in the internal affairs of other countries, nor does it accept anyone interfering in China’s internal affairs under any pretext”, CCTV reported.

The Japanese premier took a swipe at China at an East Asia Summit held in Cambodia last week, openly criticising China for “violating” Japan’s sovereignty in the East China Sea.

Xi only hinted at the issue on Thursday, however, saying that “on the issue of maritime and territorial disputes, we should abide by the consensus of principles already reached, and show political wisdom and commitment to properly manage differences.”

The fact that Xi sat with Kishida at the summit table in Bangkok despite the open criticism a few days prior gives weight to the meeting, said Rumi Aoyama, professor in Chinese foreign policy at Waseda University.

“Holding the talks was an important achievement to have for Xi’s foreign policy… and also indicates the importance of China’s relationship with Japan as its economy struggles with the zero-covid policy,” she said.

Analysts say Xi’s packed schedule of bilateral meetings at the G20 summit in Indonesia, which ended on Wednesday, and at the APEC summit was partly driven by a perceived need to counterbalance U.S. global influence over its allies, including Japan.

Kishida also told reporters that he had agreed with Xi to reopen diplomatic channels of communications, with Japan’s foreign minister set to visit China in the near future.