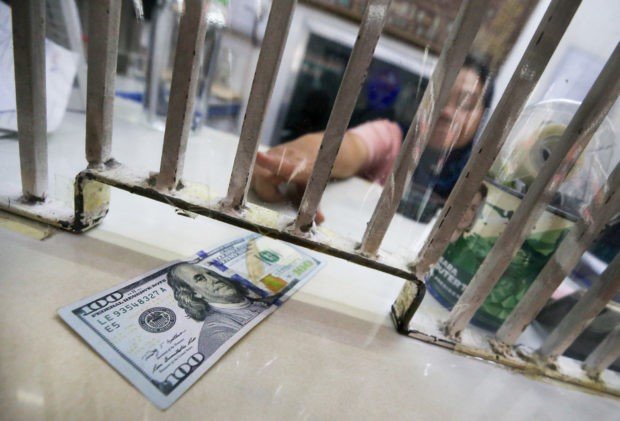 MANILA, Philippines — The peso on Monday breached the 55:$1 mark at an intraday weakest of 55.15 against the dollar, raising concerns that the local currency is sliding too fast despite government assurances that it remains stable.

“Since the start of 2022, the peso’s depreciation of 7.4 percent is now the worst in Asean (Southeast Asian markets),” Ricafort said. The peso started this year at 51 to $1.

Analysts are worried about the speed that the peso has been depreciating, and that this might come to the point when the Bangko Sentral ng Pilipinas (BSP) would have to use its foreign exchange reserves to arrest the peso’s plunge.

Emilio Neri Jr., the lead economist at Bank of the Philippine Islands, questioned government assertions that the peso was middling among Asian currencies — neither suffering the worst or faring the best, but relatively stable.

“Now that we are trading near 55.10, the peso is down by more than 5 percent in about a month… not a very reassuring pace of decline,” he added.

Neri said such a rate of depreciation for the peso would result in inflation expectations rising farther above the government’s target range of 2 to 4 percent. The latest reading put inflation at 5.4 percent in May.

Mapa has raised the alarm that the current situation was very much like that in 2018, when the BSP waited too long to increase rates and eventually spent billions of dollars to stop the decline of the peso.

No need to panic

But the alarm is not heard at the BSP, where officials maintain that interest rates need not rise in lockstep with US rates.

“When we look at the rate on a (year-to-date) basis, the average (exchange rate) is at P51.98 (to a dollar),” BSP Deputy Governor Francisco Dakila Jr. said. “This is very much within the DBCC (Development Budget Coordination Committee) assumption of P51-P53 [per dollar] for 2022.”

Pantheon Macroeconomics seems to share the BSP’s confidence about the peso, saying in a commentary that ample foreign exchange reserves would see the peso through.

BSP data showed that at the end of May, the country’s gross international reserves were at $103.53 billion, or equivalent to 9.1 months’ worth of imports of goods and payments of services. Such reserves are considered adequate if they can cover the foreign exchange needs for at least three months.

Still, the United Kingdom-based research firm described the current situation as a “currency chaos,” with “currencies tanking” in emerging Asian economies, including the Philippines.

“Currencies in Asia have been pummeled in recent months, due in large part to the strong and persistent downward pressure that the post-Ukraine invasion spike in commodity prices has had on trade balances,” Chanco said.

This was blamed on the inactivity of most central banks in five economies referred to in a commentary—the Philippines, India, Indonesia, Thailand, and Vietnam.

Monetary authorities in the latter three countries have kept their policy rates unchanged while influential counterparts such as the US Federal Reserve have shown increasing aggressiveness with bigger and more frequent hikes.

The BSP and the Reserve Bank of India have begun policy tightening, with interest rate increases totaling 50 and 90 basis points, respectively. In comparison, the US Fed has raised its policy rate by a total of 150 basis points. (One percentage point is equivalent to 100 basis points.)

In two policy meetings held last week and in May, the policymaking Monetary Board of the BSP raised the benchmark interest rate for overnight borrowings from banks, twice by 25 points or 0.25 percent. The policy rate is now at 2.5 percent after languishing at a record low of 2 percent from November 2020 to April 2022.

The much bigger jump in US interest rates has made investors flock to the US debt market, boosting demand and consequently strengthening the dollar.

“Not surprisingly then, [emerging market] Asian currencies have been plummeting,” Chanco said.