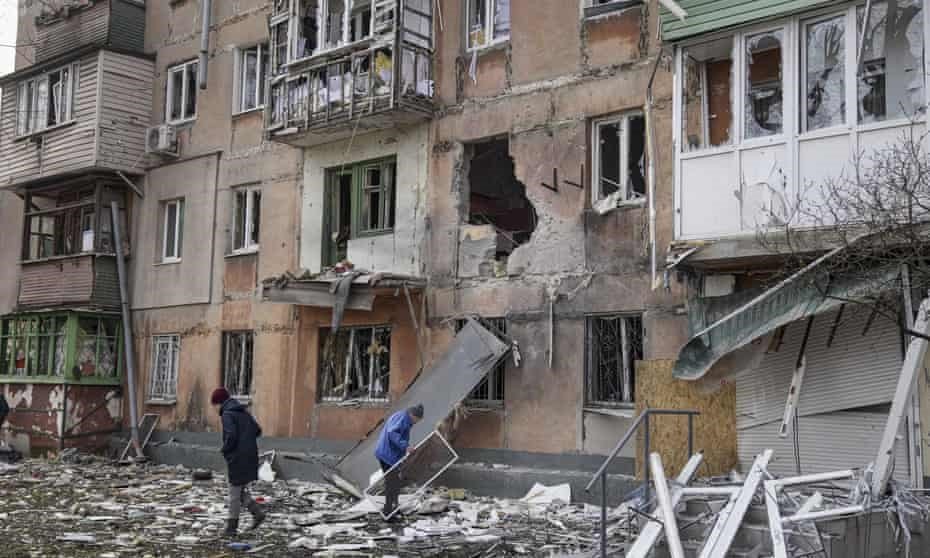 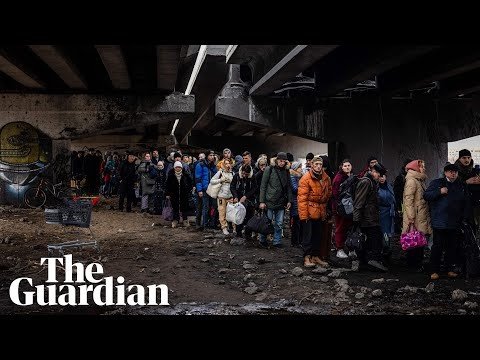 Buses and cars have evacuated large numbers of civilians from the besieged eastern Ukrainian city of Sumy but authorities in Kyiv accused Moscow of shelling a similar refugee corridor meant to allow residents to escape the devastated port of Mariupol.

As the number of people fleeing Ukraine passed 2 million and the World Health Organization (WHO) warned that the country was running out of vital medical supplies, the government in Kyiv said Russia had broken an agreed ceasefire.

“The enemy has launched an attack heading exactly at the humanitarian corridor,” the Ukrainian defence ministry said on Facebook, adding that the Russian army “did not let children, women and elderly people leave the city”.

The International Committee of the Red Cross said Mariupol residents, many of whom have had no water, power or heating since Friday, were facing atrocious conditions. “The bottom line today is that this situation is really apocalyptic for people,” ICRC spokesperson Ewan Watson said.

The city’s mayor, Vadym Boychenko, on Tuesday said the body of a six-year-old girl, Tanya, who died from dehydration had been pulled from the rubble of a destroyed residential building. “Her mother was killed,” he said. “We can’t imagine how much suffering she had to bear. In the last minutes of her life she was alone, weak, frightened, thirsty.” Ukraine’s president, Volodomyr Zelenskiy, compared the humanitarian crisis to that created by the Nazi invasion during the second world war and Ukraine’s deputy prime minister Iryna Vereshchuk described the humanitarian situation in the besieged city as catastrophic.

Boychenko said Russian forces were bombarding the area of Mariupol where some of the 200,000 people gathering to try and flee the southern city, whose capture could allow Moscow to create a land corridor to Crimea. Some roads had been mined, he said.

Efforts over the past three days to evacuate civilians from besieged Ukrainian cities were repeatedly abandoned after Russian forces continued to bombard densely populated residential areas, with civilians trying to take the routes to safety themselves coming under fire.

Evacuations however were underway in two cities. The Ukrainian state communications agency posted video of people with bags and suitcases fleeing the north-eastern city of Sumy, where 21 people were killed in air strikes overnight, and Ukraine’s deputy prime minister said 5,000 civilians were evacuated from the Sumy region on Tuesday.

The governor of the Kyiv region said 150 people had also been successfully evacuated via an unofficial route from Irpin, near the capital. Ukraine’s Red Cross said it had evacuated a group of pensioners who had been trapped in a private home in Irpin, the scene of fierce fighting. The elderly residents were loaded onto buses and driven to safety. Officials said the Russian attack on Irpin has left them “neglected and abandoned”. “Our guys rescued them,” one said.

Dozens of buses carrying Ukrainians and foreign nationals left Sumy in the direction of Lokhvytsia, to the southwest. India said it had evacuated hundreds of its students and Nigeria said 360 of its nationals – thought to be the second largest group of international students in the city after about 700 Indians and students of other nationalities including Ireland, Tanzania and Ghana – were leaving.

Nigeria’s foreign minister, Geoffrey Onyeama, said on Tuesday afternoon he was “delighted and mightily relieved […] A million thanks to the Government of Ukraine.”

Ukraine has repeatedly rejected Moscow’s offers of “humanitarian corridors” that offer fleeing civilians escape only to Russia or its ally Belarus, describing them as cynical television propaganda stunts and “completely immoral”.

Russia’s defence ministry claimed on Tuesday that Ukrainian authorities had only confirmed one safe evacuation route for civilians, from Sumy through Poltava to the Polish border, out of 10 that it had proposed.

Demand for safe routes out of Ukraine’s battered population centres has surged as Russia has intensified its missile attacks and heavy artillery shelling of residential areas, creating a humanitarian crisis of fast-dwindling food, water and medical supplies.

A team from the broadcaster Al Jazeera reported on Tuesday that large parts of Ukraine’s second city, Kharkiv, had been pulverised, with street after street destroyed and filled with rubble, bomb craters and twisted steel in what it called “absolutely shocking scene of destruction and misery”.

Ukrainian regional police official Serhiy Bolvinov said on Tuesday that at least 27 civilians have been killed in attacks by Russian forces on the eastern Ukrainian city of in the past 24 hours, with 170 dead across the Kharkiv region since the Russian invasion began.

The UN human rights office said on Tuesday it had verified 1,335 civilian casualties in Ukraine, including 474 killed and 861 injured, but added that the civilian toll was incomplete and the real figure was likely to be much higher.

Further ceasefire talks between the two sides were expected in the coming days but after a third round failed on Monday, negotiators warned not to expect subsequent efforts to bring any rapid breakthroughs. The Russian and Ukrainian foreign ministers were expected to meet in Turkey on Thursday.

The UN high commissioner for refugees, Filippo Grandi, said on Tuesday that the number of people who had fled Ukraine since the invasion began on 24 February had reached 2 million. Poland said on Tuesday it had welcomed about 1.2 million people, including 141,500 on Monday alone.

More than 2.0m refugees have fled the war in Ukraine

Grandi said that after the first exodus, a second would follow consisting of more vulnerable refugees. “If the war continues we will start seeing people that have no resources and no connections,” he said. “There will need to be even more solidarity by everybody in Europe and beyond.”

The organisation warned the country was running short of vital medical supplies such as oxygen, insulin, personal protective equipment, surgical supplies and blood products. Ukraine’s health minister, Viktor Lyashko, said 61 hospitals areound the country were not operational because of attacks by Russian forces.

Russia has made significant advances in southern Ukraine as it seeks to block access to the Sea of Azov and establish a land corridor to Crimea. Elsewhere, however, progress has become stalled, including a long military convoy that has been almost motionless for days north of Kyiv.

Ukrainian soldiers and volunteers have fortified the capital with checkpoints and barricades designed to block a takeover of the city of nearly 4 million people, using sandbags, stacked tires and spiked cables. “Every house, every street, every checkpoint, we will fight to the death if necessary,” said the mayor, Vitali Klitschko.

Ukraine said on Tuesday its forces had killed more than 12,000 Russian troops since the start of the conflict as well as destroying 48 aircraft, 80 helicopters, 303 tanks, 1,036 armed vehicles, 120 artillery pieces and 27 anti-aircraft warfare systems. Moscow has so far confirmed about 500 of its soldiers dead.

Zelenskiy addressed British MPs via video link on Tuesday, the first time a president of another country has addressed the House of Commons, comparing Ukraine’s fight for survival to Britain’s against Nazi Germany. Formal parliamentary business was suspended and MPs were given headsets for simultaneous translation.

An unprecedented western sanctions campaign has so far failed to dissuade Putin from his invasion plan. The energy group Shell on Tuesday joined a growing list of multinationals severing or reducing ties with Moscow, announcing it would withdraw from its involvement in Russian gas and oil, while McDonald’s said it was closing all its restaurants in Russia.

Ukraine’s foreign minister, Dmytro Kuleba, called on more international companies to freeze or abandon operations in Russia, tweeting: “I call on you to join the ethically and socially responsible global businesses … refusing to finance Russian violence, murders and crimes against humanity with their taxes.”

The European Commission said on Tuesday the EU could cut its dependency on Russian gas by two-thirds this year and end its reliance on Russian supplies of the fuel “well before 2030”, while the US president, Joe Biden, announced a ban on US imports of Russian oil and liquefied natural gas and the UK a ban on oil imports.