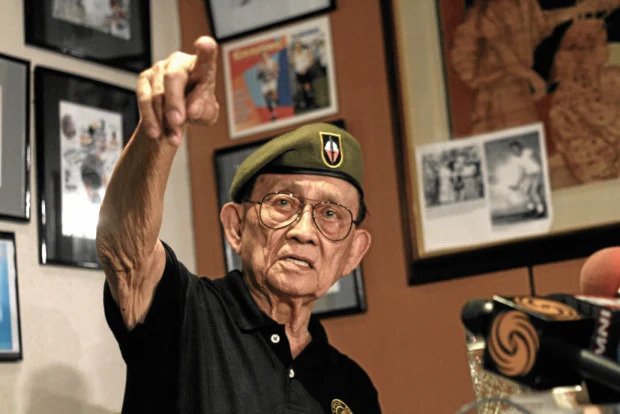 MANILA, Philippines — He was known by such monikers as “Steady Eddie,” for his unflappable nature, and “Tabako,” for his penchant for carrying a cigar.

But officials, lawmakers, and diplomats remembered Fidel V. Ramos, or FVR, best as a dedicated statesman, a soldier, an engineer, and a “serious policy wonk” who steered the country’s path to recovery from the global economic crisis of the 1990s.

President Ferdinand Marcos Jr., whose father’s dictatorship was toppled in the 1986 Edsa People Power Revolution after Ramos’ defection from the military, said his presidency “will always be cherished and will be forever enshrined in the hearts of our grateful nation.”

“Our family shares the Filipino people’s grief on this sad day. We did not only lose a good leader but also a member of the family,” the president said in a statement. Marcos’ father and Ramos are cousins.

In a statement, Vice President Sara Duterte remembered Ramos as the president who “made peace possible in Mindanao,” particularly with his signing a peace agreement with the Moro National Liberation Front (MNLF).

Most of the tributes did not mention Ramos’ role in martial law as head of the Philippine Constabulary, and instead acknowledged his key role in the People Power Revolution that toppled the Marcos regime.

Former President Joseph Estrada, who served as vice president under Ramos and then succeeded him, said he was “profoundly shocked” to learn of his demise.

“A military man by training and an engineer and a builder by background, he brought to the presidency a different view of how problems should be dealt with, overcoming them in the most pragmatic, cost-effective, and fastest way,” Estrada said also on Facebook.

“He left behind a brand of democratic leadership that allowed us to grow into the new Asian ‘tiger’ of the (1990s),” the Senate leader said.

Speaker Martin Romualdez remembered Ramos as “a pillar of strength and an inspiration to all” and “one of the great Filipino leaders that took good governance to heart.”

Former Foreign Secretary Teodoro Locsin Jr. wrote about Ramos on Twitter: “He was more than just a President; he was a defender of democracy when it had no allies left. I know. I was there with him. The rest just talked and hyperventilated; he and a handful of us fought. And won. The Presidency was just icing on his greatest moments.”

It was Ramos, according to Locsin, who “stood by Cory [Aquino] and protected the restored democracy, just as Lee Kwan Yew assured Cory he would when the chips are down.”

US Ambassador to Manila MaryKay Carlson also tweeted: “We will always remember his contributions to the US-Philippines bilateral relationship.”

The European Union called Ramos a “dedicated statesman and a friend” under whose term the delegation’s relations with the Philippines deepened, and “a pillar of democracy and an icon of Edsa revolution.”

Ramos was a “staunch advocate for the modernization and professionalization of the Armed Forces of the Philippines,” said Jose Faustino Jr., undersecretary and officer in charge of the Department of National Defense.

Senate Majority Leader Joel Villanueva said Ramos’ brand of leadership and his “iconic thumbs up sign and ‘kaya natin’ (we can do it) mentality will continue to give us inspiration to push for progress in our country.”

Sen. Juan Edgardo Angara credited Ramos for important economic reforms during his six-year term, such as ending the monopoly in the telecommunications industry and addressing the power crisis at the time.

Deputy Speaker Ralph Recto said Steady Eddie “was brave in war, industrious in work, visionary in public service, and helpful to his fellowmen.”

“Whether in the battlefield or in the bureaucracy, he was daring in deeds and bold in thinking,” he said.

Albay Rep. Joey Salceda said Ramos was “possibly [the] first president who was a serious policy wonk,” and someone “who understood the complex workings of the economy in an instinctive manner.”

“Without FVR, we would not have been able to solidify the bedrock of investor confidence that has since allowed the country to grow its economy for decades,” he said.

He said Ramos was the “moving force” in the implementation of the Local Government Code of 1991 during his term, and the “staunchest advocate” of the North Luzon Growth Quadrangle, the creative industries and performing arts, education, agricultural and fisheries development, and sports.”

In 1998, Ramos picked the older De Venecia as his successor but the latter lost to the vice president then, Estrada.