String of ministerial changes may prod Kishida to reshuffle cabinet 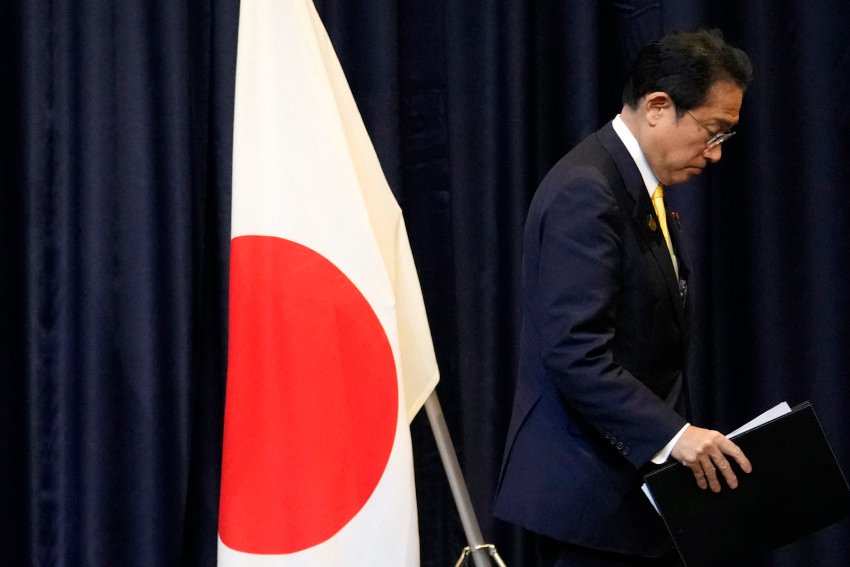 TOKYO – A close aid of Japanese Prime Minister Fumio Kishida was sacked as a minister amid a political funds-related scandal, becoming the third member to leave his cabinet in less than a month, in a heavy blow to his already fragile government.

With his power base weakening, speculation has been growing that by the end of this year, Kishida, whose approval ratings have been struggling, may carry out a second cabinet reshuffle since he took office in October 2021 in the hope of propping up public support.

Some pundits have also said Kishida could even dissolve the lower house for an election in a desperate bid to break the impasse as public support for the opposition bloc has not risen. But his political gambles are unlikely to bear fruit.

In October, Minoru Terada, the then internal affairs minister who belongs to a faction led by Kishida within the ruling Liberal Democratic Party, started to make the headlines of a weekly magazine as it revealed his improper handlings of political funds.

A series of reports released by the Shukan Bunshun magazine prompted calls for Terada’s resignation from opposition parties seeing him as unfit to supervise laws related to election and political funds.

The magazine reported Terada paid around 40,000 yen as rewards to six local assembly members in his constituency in Hiroshima Prefecture for their support in his election campaign in October 2021. Such payments are prohibited by the public offices election law.

Kishida, head of the LDP, also represents a constituency in the western Japanese prefecture.

Prior to Terada’s dismissal on Sunday, two other ministers resigned, sparking fears of a domino effect of successive resignations of cabinet members.

Daishiro Yamagiwa stepped down as economic revitalization minister in late October over his close ties with the Unification Church, founded by a staunch anti-communist in South Korea in 1954. The religious group is often characterized as a cult by critics.

Yasuhiro Hanashi, also a member of Kishida’s intraparty group, resigned as justice minister earlier this month in the aftermath of mounting backlash against his gaffes including one regarded as making light of his role in authorizing executions of death-row inmates.

On Sunday, Kishida said he sacked Terada because he wants to “prioritize” delivering on his government’s key policy goals.

During the ongoing extraordinary Diet session, Kishida has tried to enact an extra budget to fund an economic package to ease the negative impact of rising prices and relief laws for those financially afflicted by the Unification Church and other groups.

Opposition parties, however, are set to zero in on a fourth target — reconstruction minister Kenya Akiba, who has been grilled over a separate political fund scandal — leaving Kishida with the difficult task of proceeding with parliamentary deliberations through Dec. 10.

A senior LDP lawmaker of the House of Representatives said the succession of minister resignations and dismissals will push down public support ratings for Kishida’s administration further, while negatively affecting parliamentary deliberations.

In recent months, approval ratings for Kishida’s cabinet have been nearing what is widely seen as the “danger level” of 30 percent due largely to the relationship between certain LDP lawmakers and the Unification Church.

Hiroshi Shiratori, a political science professor at Hosei University, said “movements aimed at ousting” Kishida from power may happen, if some LDP members begin to think that they cannot win local assembly elections in April under the unpopular premier.

In early August, Kishida rushed to reshuffle his Cabinet with a view to reversing public support and excluding ministers having dubious ties with the Unification Church. The personnel change was initially expected to take place in September.

Less than four months after the cabinet reshuffle, Kishida has been compelled to make further changes to give a boost to his government.

In mid-November, Yuichiro Tamaki, head of the opposition Democratic Party for the People, said in a TV program that Kishida has “no choice” but to reshuffle his Cabinet or dissolve the lower house to “achieve a breakthrough.”

At a news conference in Bangkok on Saturday to conclude his Southeast Asian trip to attend international gatherings, which was overshadowed by the minister scandals, Kishida said only that he will decide on a cabinet reshuffle at an “appropriate time.”

But it is uncertain whether a hasty reshuffle will boost Kishida, given that there are only a limited number of fresh faces who would contribute to buoying the popularity of his cabinet.

In light of an ability to answer questions in Diet sessions, Kishida appointed lawmakers with previous experience as a minister when he replaced the three who left his cabinet.

Kishida will also have trouble finding suitable ministerial candidates who have no links with the Unification Church, as an LDP internal investigation found around half of the party’s lawmakers had some connection with the dubious religious group.

Tomoaki Iwai, a professor emeritus of political science at Nihon University, said another cabinet reshuffle would intensify conflict among LDP lawmakers, bringing about further confusion within the ruling party.

The LDP’s major victory in the House of Councillors election on July 10 seemed to have given Kishida a firm government for what was dubbed his “golden three years” free of national elections unless he dissolved the House of Representatives.

Nevertheless, Kishida has been placed in such a predicament that he would be unable to maintain his power unless he dissolves the lower chamber of parliament before the opposition camp gets well prepared for an election, political experts said.

Hosei University’s Shiratori said that if the LDP secures a victory, Kishida is sure to declare that the government led by his ruling party has won public confidence.

The professor, meanwhile, said that if voters believe that the lower house election is designed to “prolong the Kishida administration’s life,” his attempt to regain his power would end in failure.